Hunny-Bunny is a short film about a couple with Down syndrome, Blair and Susie, entering their 16th year of true love. Through the good and the bad, ups and downs this relationship thrives.
Their 6 minute love story is something that we all wish we had.

Part of the Disability Film Challenge

Meet the Cast and Crew

Susie was born with Down syndrome in February, 1967. She has been dating her boyfriend Blair for 16 years. Susie has been involved with BORN TO ACT PLAYERS since 2005 and has been in multiple productions including “Beauty and The Beast,” “Fiddler of the Roof,” “Annie Get Your Gun” and improvisations. Susie also played in the hand bell choir in the feature film “Carol of the Bells.”  Susie has loved performing since she was a little girl. She loves to sing and dance with her boyfriend Blair.  During the quarantine, they sing together on zoom calls. She loves acting with Blair and having the chance to be in the production of Hunny-Bunny with her favorite guy, Blair.

Blair Williamson is a man born with Down syndrome who has been in love with his Hunny-Bunny Susie Schallert since their first date on April 1st, 2004, no foolin’.  Blair became a professional actor at the age of 11 when featured in a Procter & Gamble commercial as a Special Olympic Athlete.  That led to a very nice career with great TV credits including him having the joy of being killed on CSI, getting a nose job on NIP/TUCK, playing a little brother to a doctor on ER, a patient on SCRUBS and more.  He also has many independent features and short films on his resume.  He met the Barriels (editor Henry and Co-producer Eva) in 2000 when he was cast by them as one of the leads in their feature film HEARTLAND. He had the great pleasure of meeting and working with their son Jadyen this year.  Producer David Zimmerman met Blair when David volunteered at the acting class BORN TO ACT PLAYERS in 1997 and they have remained friends. David watched Blair and Susie Q’s romance grow over the many years and appreciates the relationship they built together enough to create this lovely opportunity to share their special love story with others.  Blair is grateful to the wonderful team that made HUNNY-BUNNY a reality.

Jayden Barrial is a recent graduate from the Cinematic Arts Academy at Millikan Middle School. He has directed over 12 films. His film, Coke vs Pepsi, was the winner of Best Comedy at the CAAM Festival of the Souls. His film, Da Cookie, premiered at Dances with Films. Hunny-Bunny is his first documentary and he has thoroughly enjoyed the process of this new genre.

Henry Barrial is a director and writer of award-winning films which include Some Body (Sundance Film Festival Dramatic Competition), The Lonelys (Award Winner at San Francisco International Film Festival and Cleveland Internal Film Festival) PIG (Winner of 7 Festival Best Sci-Fi Feature awards, The House that Jack Built -streaming on Amazon- and DriverX starring Patrick Fabian (Better Call Saul), Tanya Clarke (Banshee) and Desmin Borges (You’re the Worst) released in theaters and now streaming on Amazon. Henry is attached to direct Rush Back produced by Mario Kassar and starring Zach McGowan and is also seeking financing on a romantic comedy written with Greg Pitts entitled How to Make a Marriage Great. Henry is happy to be working with Blair Williamson again on Hunny-Bunny and looks forward to seeing the film come together with such a great team.

Eva Fisher (Eva Barrial) is from Florida and moved to Los Angeles to pursue her acting career. A  few credits include Netflix’s Unbelievable, Dr. Ken, Bones, Melissa & Joey, Modern Family,  LA’s Finest and Paul Thomas Anderson’s Inherent Vice. She also produced, starred and wrote a film, Heartland, which debuted at Ft. Lauderdale Film Festival. Heartland was a scripted drama about her relationship with her older brother who has Down syndrome. Eva is excited to be a part of Hunny-Bunny. Being able to bring awareness to the community about Down syndrome in a realistic format gives her great joy!

Heather moved from the California hustle, leaving her position in production and events for Evolving Out Loud with Kyle Cease, to the serene South of North Carolina, 4 years ago. Following her love, musician and writer Chris Hendricks. Heather and Chris’greatest creation is their 2 year old daughter, Fern. Heather holds a degree in Fine Art Painting and is an expert in human relationships and hospitality from 21 years in the restaurant industry. Heather Currently supports one of the countries Leading Trauma Psychologists, Dr. Stephen J. Terrell with Somatic Experience trainings around the world.

Chris Hendricks is a native of NC. He’s traveled around the U.S. and shared his music with Canada and Europe for several years. Over the past decade he has written and performed songs for the NHL, MLS and a variety of other sports establishments. His music has been played everywhere from Arena’s in the US to the Louvre in Paris. Written pieces and scores for multiple shows and platforms including the theme song for Hulu’s, “Radical Dating,” (2016) and music for Dawn: Dueling Bloodlines Netflix pitch (2020). He works on multiple creative projects with Trevor Bumgarner, and Andre DiMuzio including written work the romantic comedy “Oh Crappy Day,” the Christmas drama “Carol of the Bells,” and the upcoming documentary “My Next Breath.” Chris is also a professional speaker and writer. He lives in Chapel Hill, NC with his partner Heather and his 2 year old daughter Fern.

Trevor Bumgarner is a composer who thrives on collaboration and curiosity, with his work taking complex ideas and presenting them in simple ways. From the New York City Ballet’s Choreographic Institute, several Off-Broadway shows, co-hosting the Faking Notes Podcast, and scoring and contributing to a variety of films that have been screened all the way from Guam to Tribeca to #2 on Netflix, Trevor can’t get enough of any opportunity to work with friends. He attended The Juilliard School and UNC-Greensboro studying composition and bassoon.

David Zimmerman, is the creator and producer of the MEET THE BIZ workshops, which looks to make diversity a common place and bridge the gap between ability and disability.   As a personal coach, he has been hired by production companies headed by Ryan Murphy and Michael Patrick King.   He has cast for Showtime including for the series, PENN & TELLER’S BULLS**T and Joey Travota and Inclusion Films, CAROL OF THE BELLS starring RJ Mitte, Lee Purcell, Donna Mills, Andrea Friedman, Donna Pescow, and Geri Jewell..    David has enjoyed acting in films like MEET THE FOCKERS and the award winning animated film HEAVENLY PEACE.   He has been a contributing writer for magazines such as ABILITY and ZENSATIONS.
One of his loves is teaching at John Paizis’s PERFORMING ARTS STUDIO WEST.   He is so happy to be able to create films, like HUNNY-BUNNY, that show the love of the human heart.   And he is thrilled to be able to create projects with some of his extended family, Blair Williamson and Susie Q. Schallert.

Photos from the Film 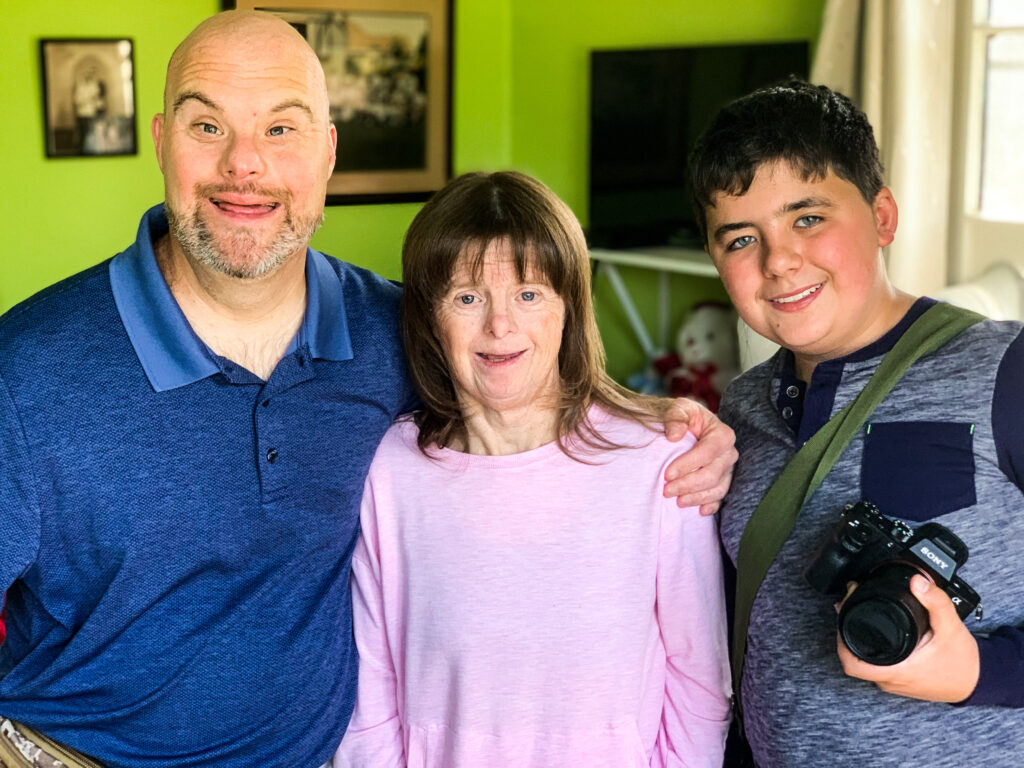 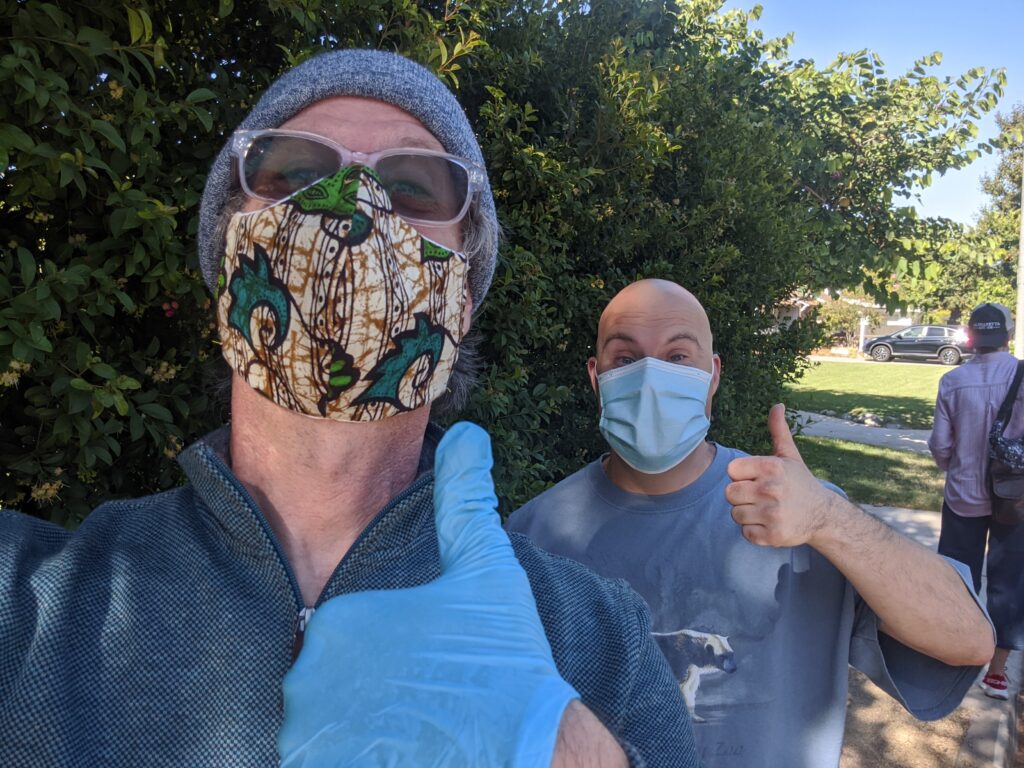 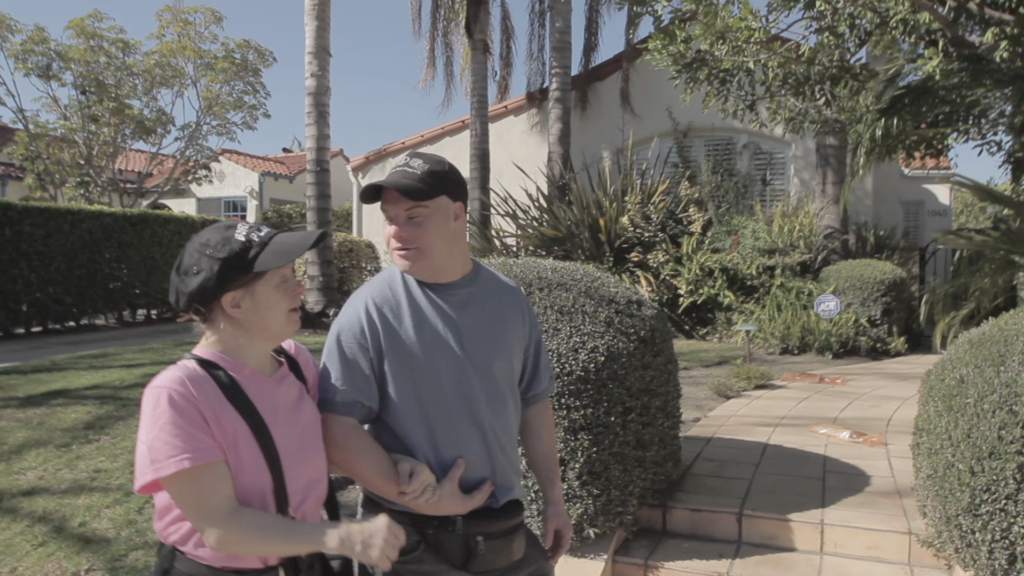 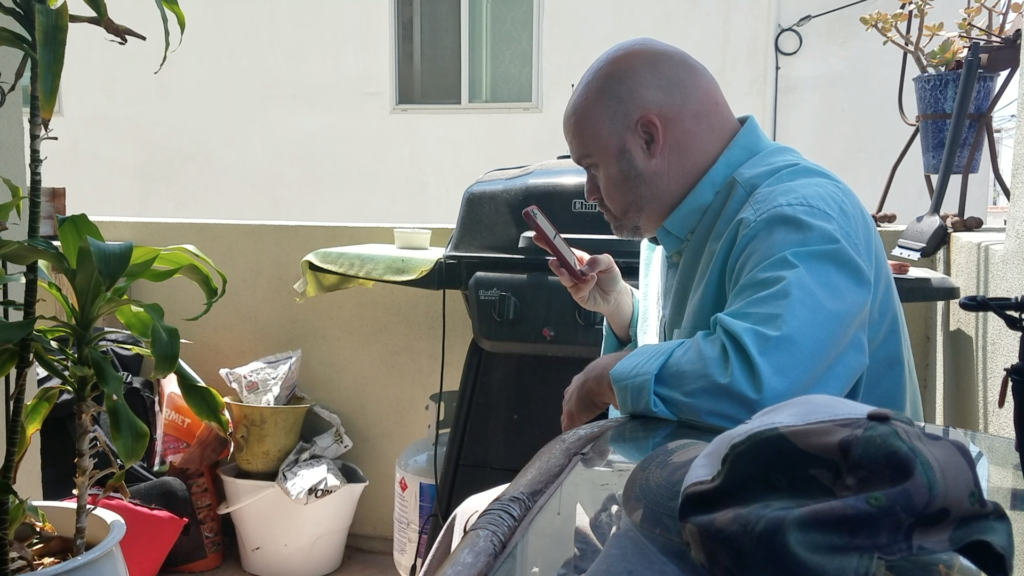 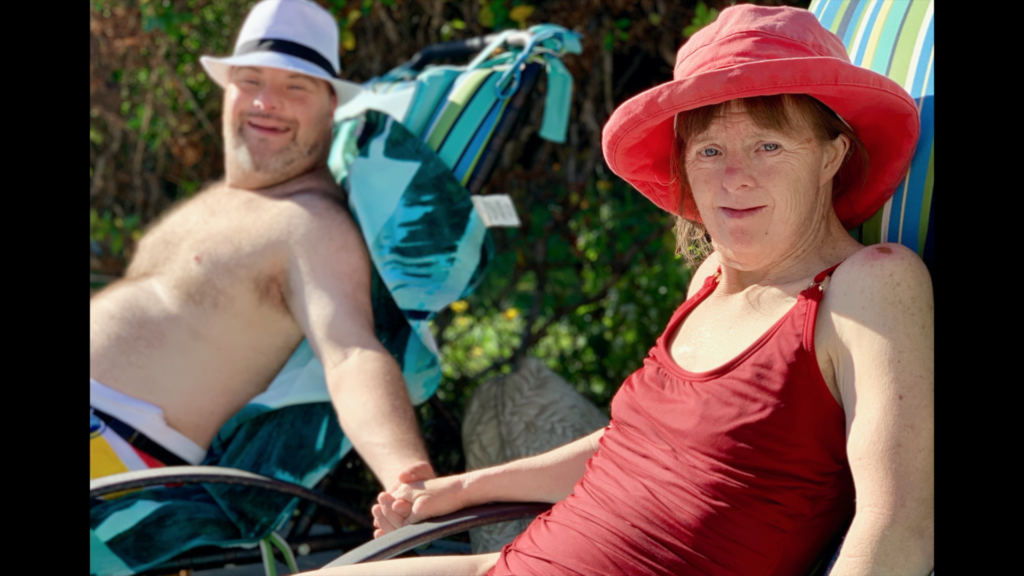 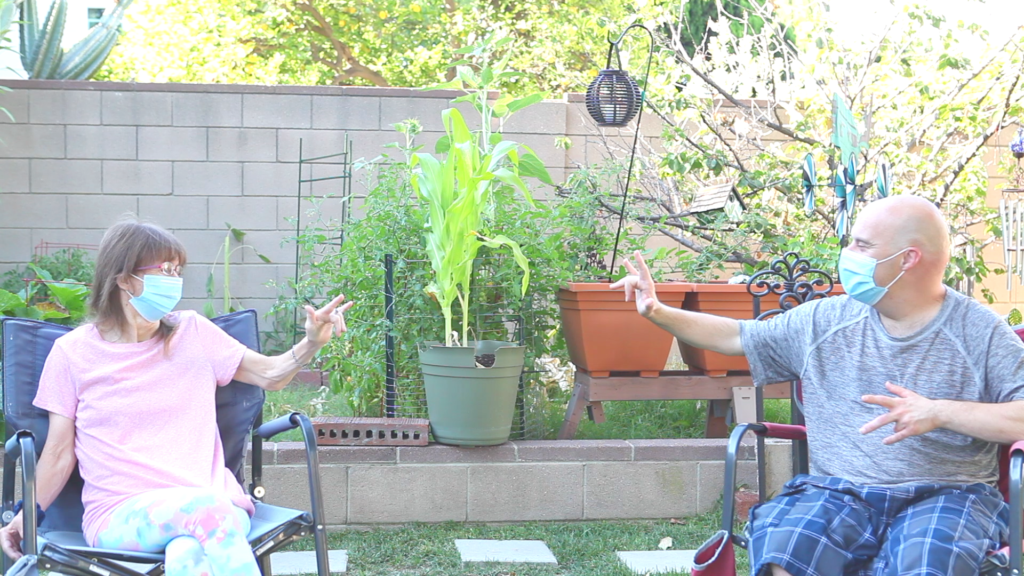 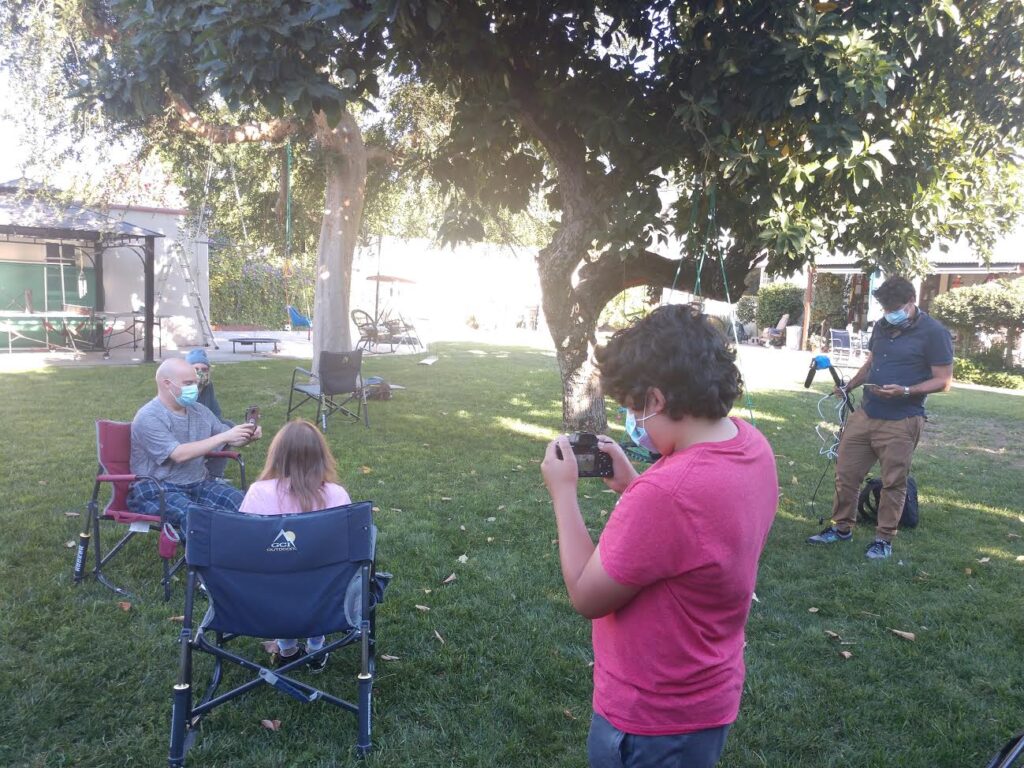 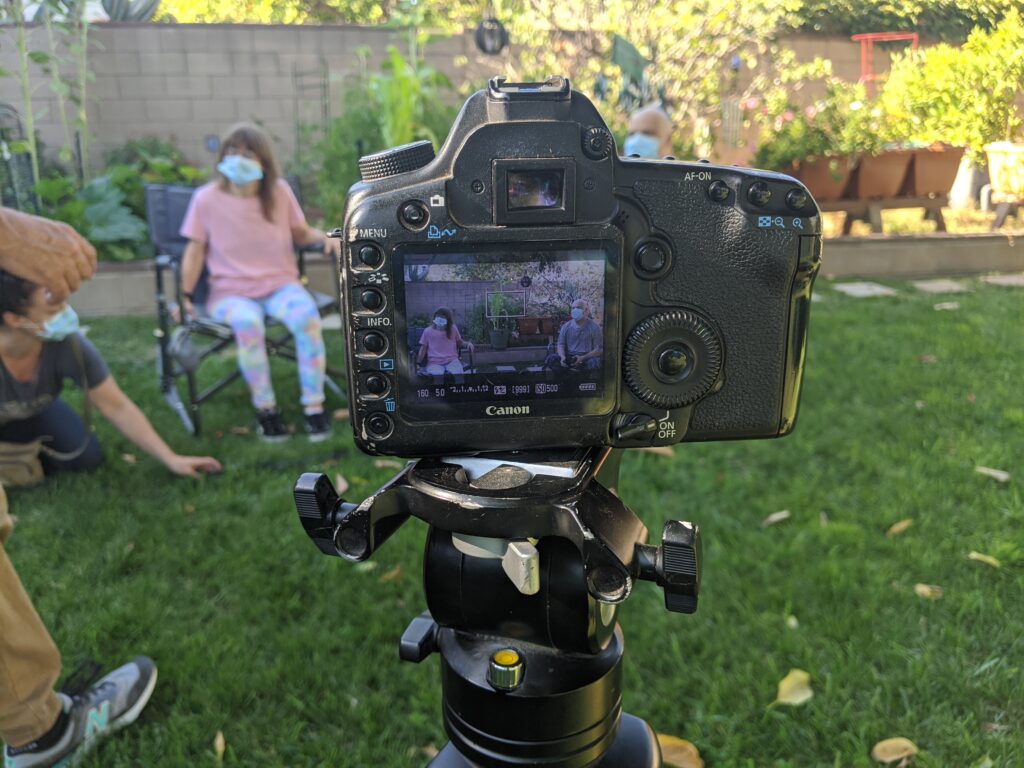 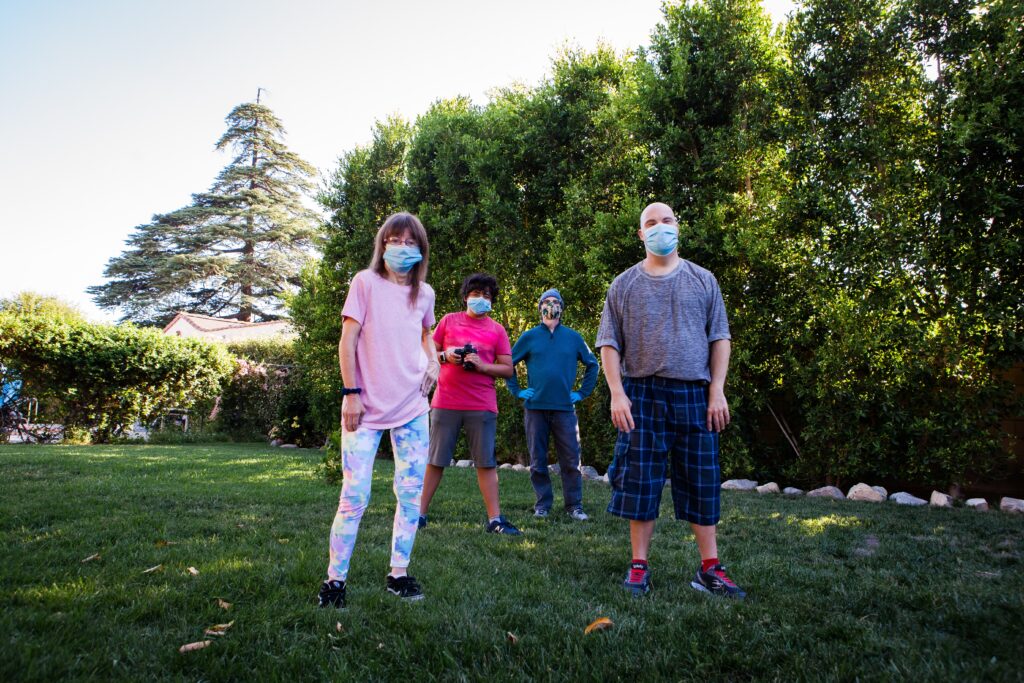